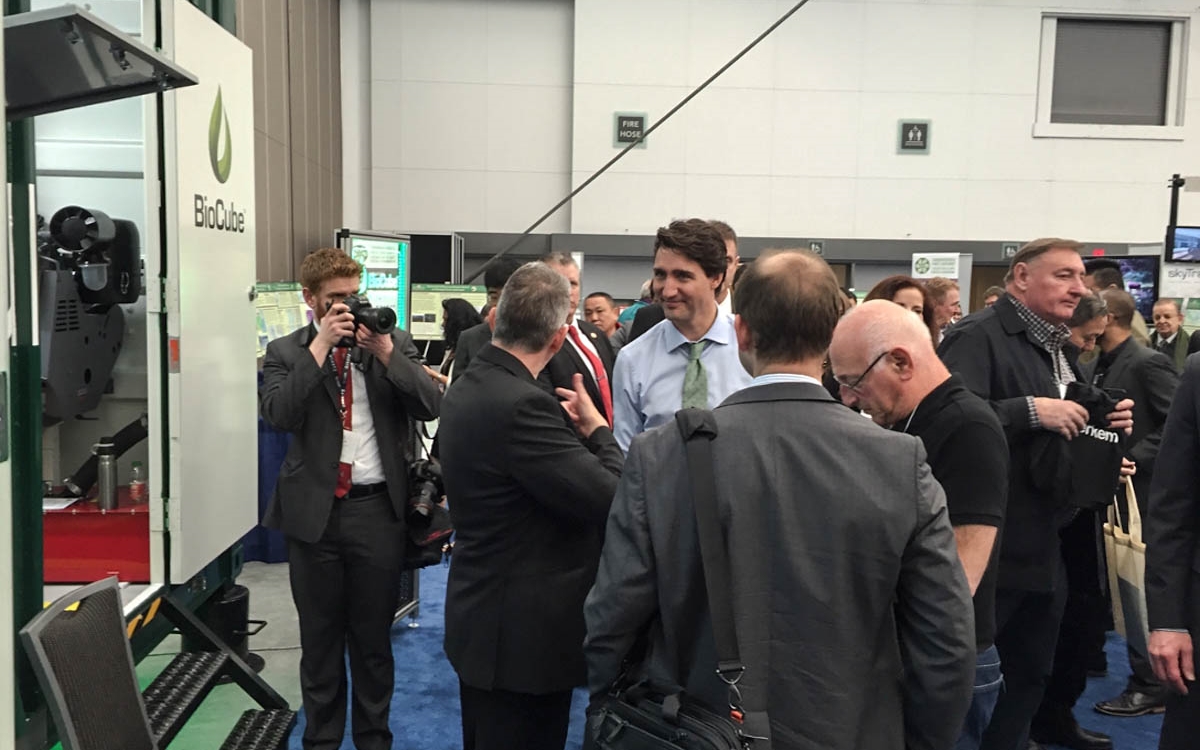 The BioCube Corporation was delighted to have The Right Honourable Justin Trudeau, Prime Minister of Canada visit the BioCube™ at the GLOBE Conference in Vancouver. Held every two years in Vancouver, BC the GLOBE Series of conferences has become the pre-eminent platform for discussion of environmental issues and clean technology solutions, bringing together ‘the best and the brightest’ of the international sustainable business community.

A champion of clean, sustainable technology the Prime Minister spent time inspecting the BioCube, and stepped inside the transportable biodiesel refinery for a walk-through of the process.

“Prime Minister Trudeau thanked us for exhibiting the BioCube at the Expo and was impressed with the technology” said Peter Wilken, Director of BioCube Corporation. “Of course it was a privilege to be chosen by him as one of the technologies to visit and I thanked him in return for doing so. After listening with interest to how the BioCube can produce commercial quantities of high quality biodiesel on or off-grid he asked if the technology was primarily designed for developing economies. I answered yes, that is where the focus of our attention is, particularly in markets like India, Africa, China, SE Asia and Latin America, but that it is equally relevant for all diesel users looking for a clean sustainable alternative liquid fuel in biodiesel. It’s relevant to everybody that values sustainable energy independence, so it’s relevant in developed markets too.”

BioCube Corporation was invited by the organisers of GLOBE™ to exhibit the BioCube™ at the Globe Conference and Innovation Expo.

The BioCube™ is a transportable biodiesel refinery design-engineered within a 20’ sea container. It can produce in excess of 1.5 million litres of high quality biodiesel from a variety of waste and renewable feedstock oils such as waste vegetable oil (WVO) from restaurants, canola, crude palm oil (CPO), soya, corn, coconut, pongamia and tallow. It can run off-grid on the biodiesel it produces or on-grid where electricity is available. Given suitable feedstock, biodiesel produced by the BioCube meets stringent ASTM quality standards and can be used directly to fuel any modern diesel engine without modification, replacing the need for carbon-intensive fossil diesel.

Biodiesel has many advantages over fossil diesel; it can reduce carbon emissions by up to 70%, has natural cleansing properties that make engines run cleaner and more efficiently – and being made from waste materials or oxygen-producing plants, it is carbon neutral and 100% renewable. Biodiesel produced from WVO in BC by the BioCube has a carbon intensity index 95% lower than fossil diesel.

“We recently commissioned a BioCube for a customer in a remote part of the Congo where diesel fuel is expensive and often unavailable. Without fuel for their Palm Oil Mill and for the trucks, tractors and diesel generators that keep the plantation running, thousands of people within the community it supports have their livelihoods threatened. The BioCube was transported from Canada to the Congo, then barged 1.500 kms upriver; it was operational within 48 hours of arrival and producing biodiesel from their excess CPO that went straight into diesel engines on the plantation. Not only is it protecting livelihoods and diversifying demand for their product, it is replacing expensive, imported fossil diesel that carries a large polluting carbon footprint, with clean, carbon-neutral biodiesel produced and consumed at the point of harvest.”

“This is a business model we see progressive governments around the world following in Asia, Africa, Latin America, and Oceania.” says BioCube CEO David Tait.

“We’re still a young company moving into full commercialization, but we now have machines operating in four continents. We believe we have a world-beating technology that has been developed and manufactured with our partners CBVL in Canada…it’s a story we’re writing in Australia, Africa and India right now …the BioCube self-evidently demonstrates its value when it’s operating, so we’re working hard to get more units in the field in more markets around the world. We receive fresh enquiries every week and are currently pursuing opportunities in Indonesia, the Gulf States, Latin America, the West Indies and Pacific Islands amongst others.”

“Invariably, the first question I’m asked by countries is: ‘Can we manufacture the BioCube here?’ We’re amenable to assembly and manufacture under license where demand merits it and where production quality standards expected by our customers can be met” Mr Tait added.

Chairman of BioCube Corporation, Dennis Chisholm said: “It’s terrific the Prime Minister of Canada should recognize the potential of our technology to provide a solution for customers seeking greater energy independence and a clean, sustainable alternative to fossil diesel; we are honoured to have him visit us”.

The BioCube technology was recently awarded the prestigious Global Innovation and Friendly Energy Award by the Biodiesel Association of India in recognition of its ability to produce high quality biodiesel from renewable sources that improves India’s energy independence at a commercial and community level. 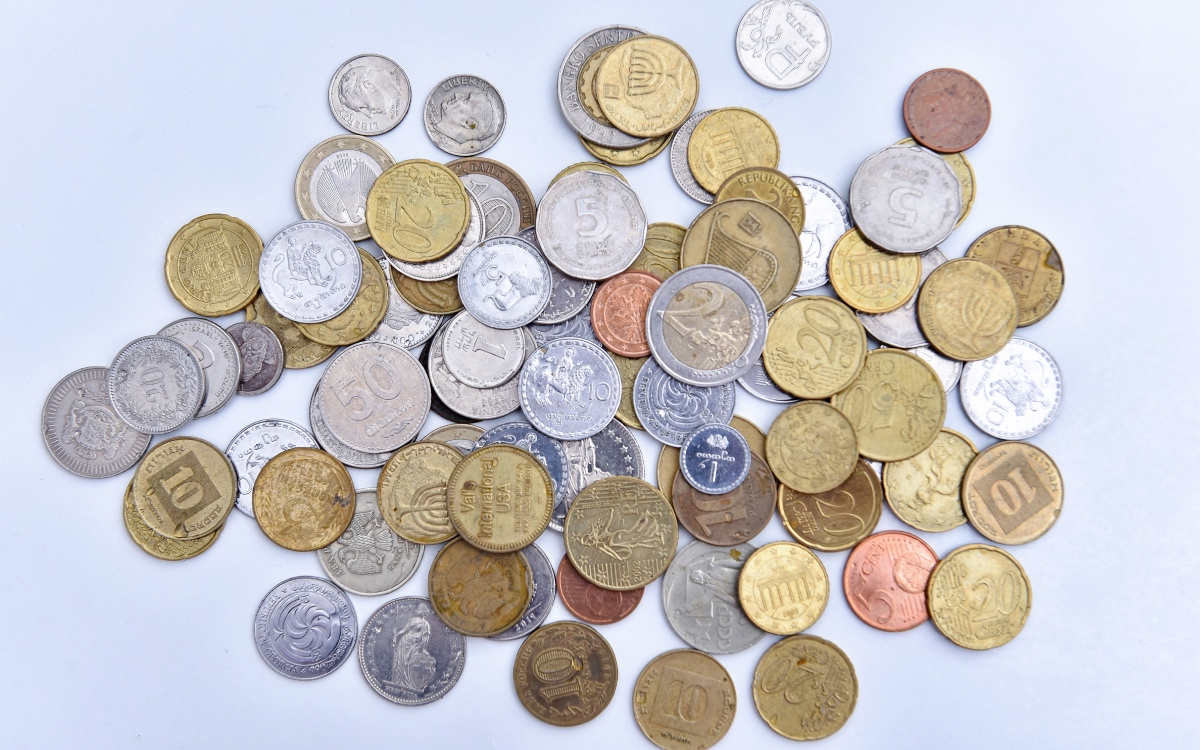 At the BioCube Corporation, we firmly believe that the recycling and processing of used cooking oils (UCO) into biodiesel represents a key pillar in the 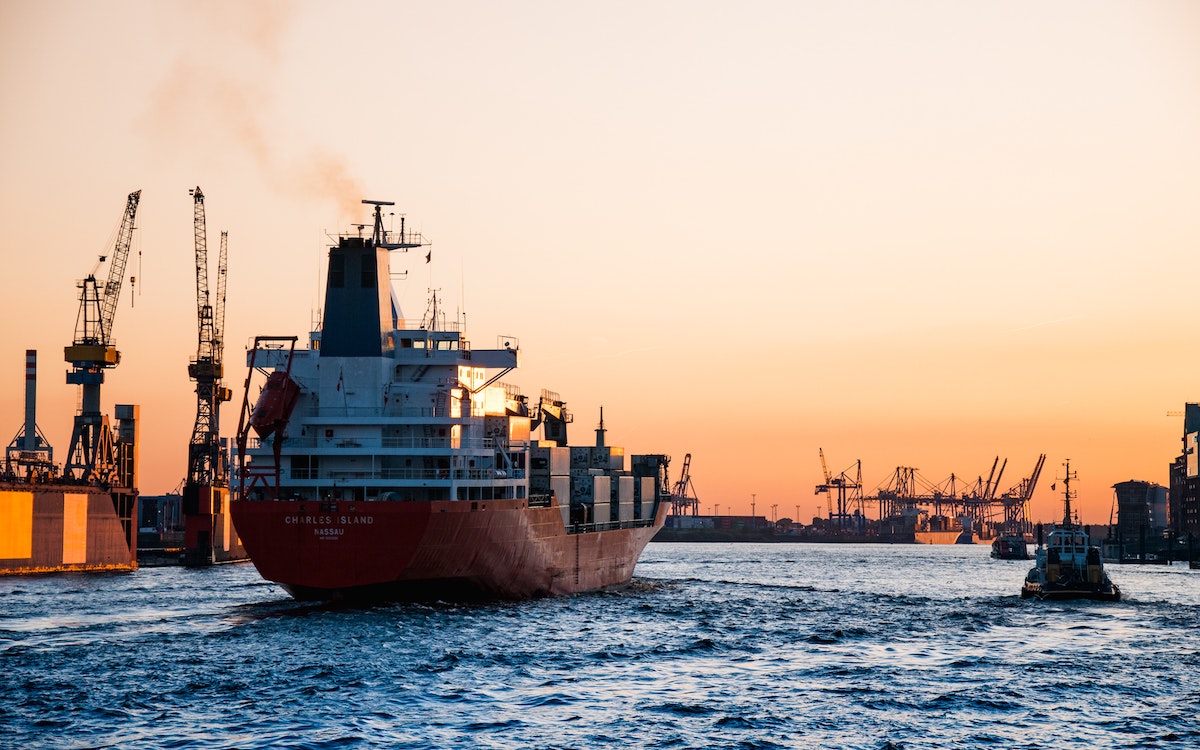 Our Fuel Supply is Scarce It is a well-known fact that Australia’s reserve of diesel fuel is limited. Indeed it is estimated by the Australian 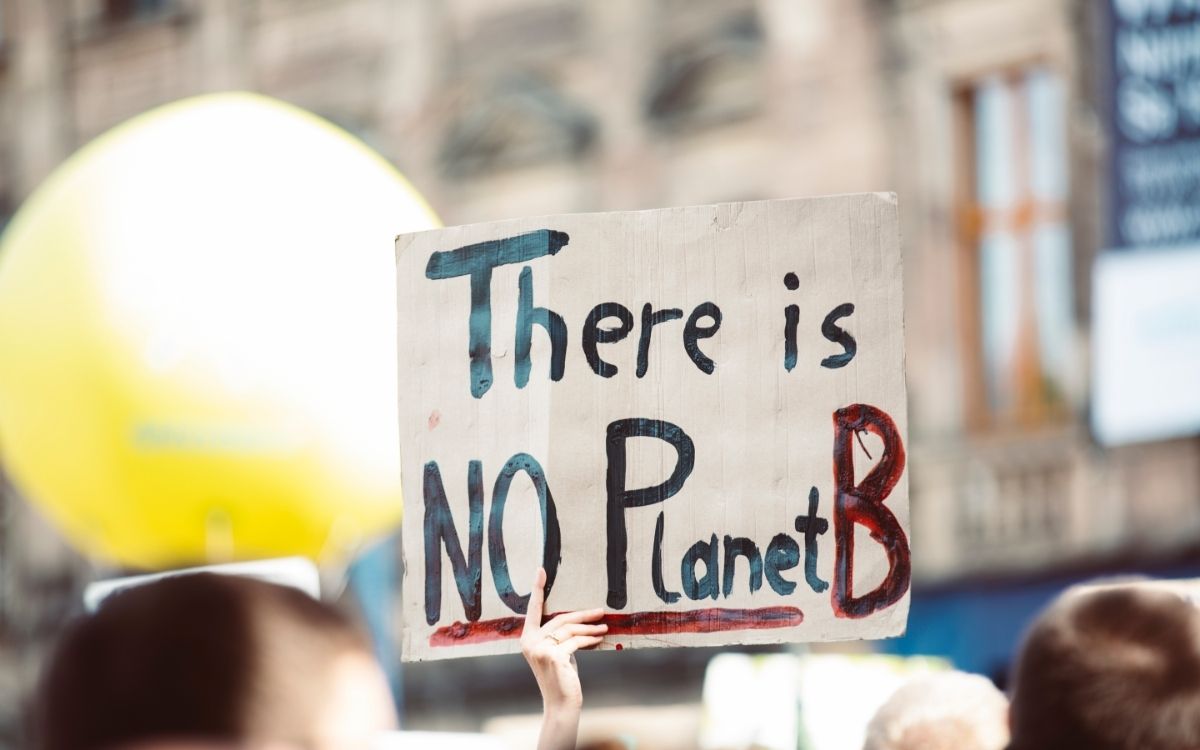 Greta Thunberg is driving a global climate movement. The question is how, do we carry this momentum, and what role can the BioCube™ play?